Slush is a quick-paced abstract card game for 3-6 players. The goal is to claim as many cards as possible. Claim all 6 cards of your color to win instantly.

In order to claim a card you must either have more cubes of your color on this card than any other player or you must lock this card with your meeple.

Starting with the person who most recently consumed an iced beverage and going clockwise, the players take turns by doing one of the following:

Tip: arrange cards in rows sorted by border color and pip values; it’ll be easier to see at a glance which cards are claimed by what player.

If on your turn you are unable to either draw (the draw deck is depleted), bid (you are out of cubes) or lock (you've already used your meeple), the game ends. 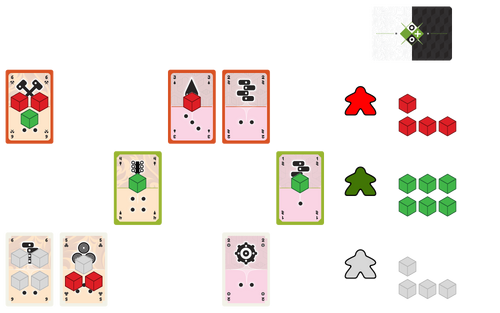 Tip: by placing 4 cubes on an a card with no bids, you guarantee that other players won’t be able to claim this card for themselves.

The first player to claim all 6 cards of their color wins the game instantly.

If none of the players was able to claim all 6 cards of their color by the end of game, the winner is defined by the highest total pip value on all cards claimed by the same player. In case of a tie, the player who claimed more cards overall wins. If the scores are still tied, the game is a draw.

Retrieved from "https://greenbox.fandom.com/wiki/Slush?oldid=832"
Community content is available under CC-BY-SA unless otherwise noted.