In the times when the world was created, the Creator left the mortals a legendary legacy: the Eye of the Tiger - a stone with unconquerable power. But in the course of time, there were countless battles over this stone and finally the creatures of darkness prevailed and took the stone into the depths of their underworld. It was centuries before the stone's hiding place was discovered by the Circle of Lore Keepers. And only one they wanted to entrust this knowledge: YOU! Your mission is to lure the creatures of darkness from their hiding nest, defeat them and return the stone "The Eye of the Tiger" to its rightful owners.

The player builds a deck of cards during the game. This represents the combat strength and ultimately determines whether the player can win against the game. His goal is to score more points with defeated monsters than there are points of monsters in the monster discard pile.

When you finished setup, it should look like this: 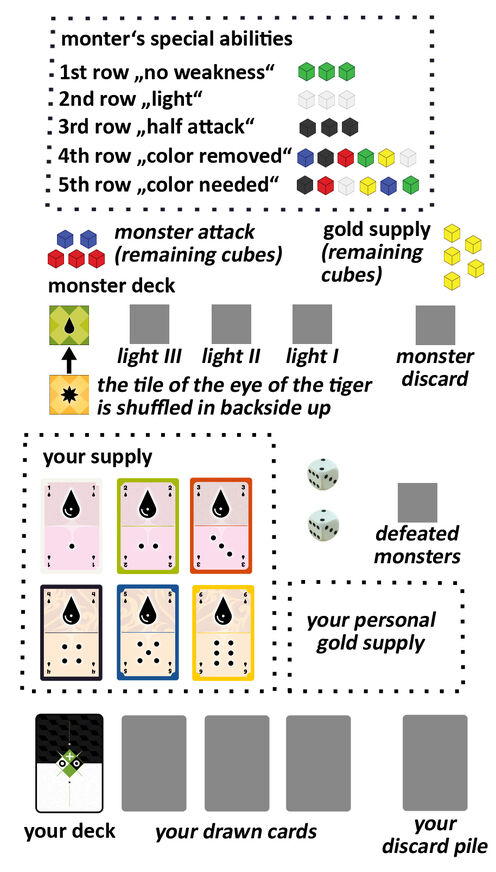 At the beginning of your turn, you reveal the top three cards of your deck. When your deck is used up, now and only now you have the possibility to thinning your deck by removing up to 2 cards from your deck. Then shuffle your discard pile and form a new deck.

In your turn, you have a choice of two actions, one of which you may take:

Each action consists of several steps, all of which you must follow in the given order.

Buy in your supply[edit | edit source] 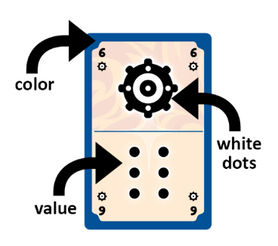 The cards you have in your deck at the beginning and buy from your supply during the game have various functions while their drawn, which are different depending on their use (buy or fight).

Since the monsters are still in the cave entrance, you need a certain amount of light to fight them. The further back (the closer to the monster pile) the monster is, the more light you need. The first field next to the monster pile needs 3 light, the middle one 2 light and the outermost one 1 light. If there is a yellow cube (activated special ability) on the monster, the cube reduces your amount of light from your drawn cards by 1. If you don't have enough light, you can still attack. However, each missing light reduces your attack power by 2.

Scenerie 1: Able to fight, because enough light and attack power

- the player has 1+0+3 = 4 light (white dots per each card off-rounded half), so he get's no penalty on his attack power

- the player has 5 attack (sum of values of the cards)

Scenerie 2: Able to fight, although not enough light, but enough attack power to take the penalty

The player is able to attack all the monsters because

Scenerie 3: Not able to fight, because mot enough light and not enough attack power to take the penalty

The player isn't able to attack a monster because

- all other monsters are to strong

Scenerie 4: Able to fight, but losing a card after fight

The player is able to attack all the monsters, but

- if the player fights against the monster III, he needs the cards "drop 6" and "wheel 2" to take the light penalty of 2. Because the monster has also a wheel, the player loses the wheel card after fight.

- if the player fights against the monster II, he needs all the cards (enough light). Because the monster has also a drop, the player loses one of the drop cards after the fight.

- if the player fights against the monster I, he needs the cards "drop 6" and "drop 1" or "wheel 2" (enough light). Because the monster has non same symbols, the player didn't lose a card after fight.

- if the player fights against the monster III, he just needs the card "arrow 4" (enought light and enough attack power). Because he just used 1 card to fight, he gains 3 extra gold for this fight (white dots in the wheel up-rounded half).

- if the player fights against the monster I, he needs the cards "arrow 4" and "wheel 3". Because both cards have the same border color (green), he gains 1 extra gold for this fight (white dots in the hammer up-rounded half).

Each time you roll a double with the dice when determining the strength of the newly appearing monster, you activate a special ability on that monster. This ability remains on the monster until it is defeated or it disappears into the Monster Card discard pile (except “Emerging pain”, as this function is executed immediately one time).

* If a monster (defeated or discarded) with such a cube disappears, put it back on the corresponding row on the far right.

If you have more points in your defeated monster pile than are in the monster discard pile, you have won the game and saved the Eye of the Tiger. We better not think about the alternative...

For players with a more experience and who want to increase the difficulty of the game, therefore is this advanced mode. Additional monster abilities and properties come into play, which are triggered by the dice roll of a newly appearing monster or situationally. So, if you roll a double, the monster get's the standard AND the advanced ability.

* The placed cubes move with the monster tiles.

Retrieved from "https://greenbox.fandom.com/wiki/Eye_of_the_Tiger?oldid=1258"
Community content is available under CC-BY-SA unless otherwise noted.